Kelly was rushed to the emergency room and, over the next few years, endured multiple surgeries to try to fix the damage done by the hose.

QuikTrip is a convenience store chain, primarily in the Midwest, that sells fuel along with the snack foods commonly found inside such stores. QuikTrip also provides a free air compressor that its customers can use to put air in their tires. 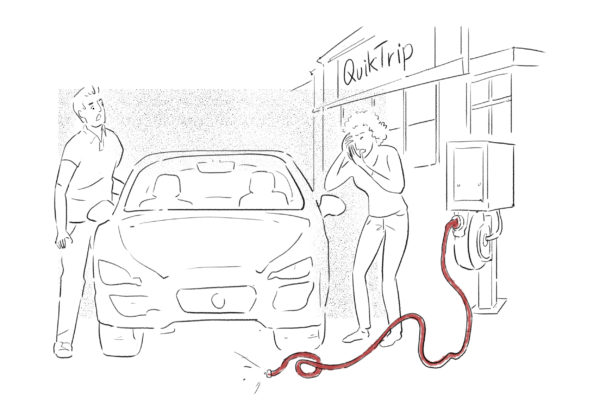 Our client, Kelly, and her husband stopped at QuikTrip to put air in their tires on the way home from work. The QuikTrip was busy that evening and there were other cars in line to use the air compressor. Being the gentleman that he is, Kelly’s husband got out of their car in order to help an elderly woman put air in her tires. For her part, Kelly was standing near the base of the air compressor, ready to hit the button to restart the air once the automatic timer shut off.

In order to reach the woman’s tires, Kelly’s husband stretched the hose over the hood of the car. At some point, he lost his grip on the hose, which then retracted back to its base with such force that it flew up and hit Kelly, badly damaging her eye. Kelly was rushed to the emergency room and, over the next few years, endured multiple surgeries to try to fix the damage done by the hose.

Kelly came to us wondering if she had a case; after all, the air compressor is a free perk given out by QuikTrip. We assured her that, even though the service was free, QuikTrip still was required to make it safe. Indeed, QuikTrip doesn’t provide free air out of the goodness of its heart—it does it to drive customers into the stores.

QuikTrip ignored our pre-litigation communications, so we filed a lawsuit against them on Kelly’s behalf. If you’re interested, you can read a redacted version of the lawsuit here: 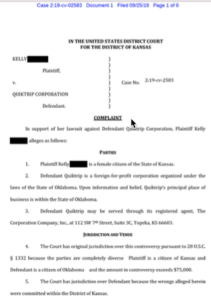 In this case, we partnered with our good friend, Ben Fields, who is an excellent attorney in his own right. Together, we showed that QuikTrip could have installed alternative air compressors that would have been safer by retracting more slowly or by not retracting at all. We also showed that, given the force with which its hoses retract, QuikTrip should have put a warning on the compressor educating the public as to where it would be safe to stand when the compressor is in use. We were confident that the jury would hold QuikTrip liable.

QuikTrip was represented by a very smart defense attorney. We do not know exactly what he was thinking, but he must have assessed the case similarly because, many months before trial, the parties successfully resolved the case to everyone’s satisfaction. (Unfortunately, we are not permitted to tell you more than that.) Suffice it to say, we were really happy that Kelly was able to put this event behind her and move on with her life.