At mediation, the insurance company offered its $500,000 policy limit plus an additional $2 million.

One day we received a phone call from a husband named Alan. He had gotten our name from a former client of ours who attends the same church as Alan and his wife, Tammy. 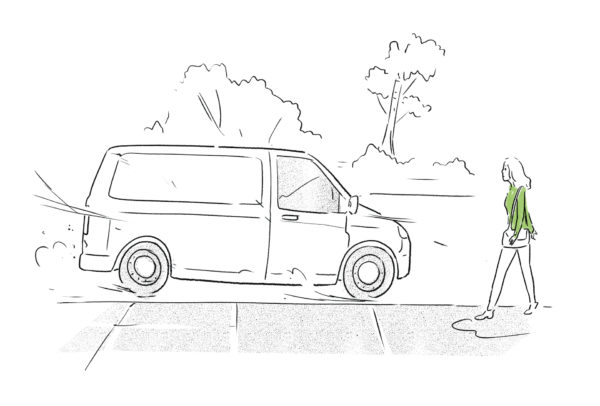 According to Alan, Tammy was in bad shape. She had been hit by a van while walking to work one morning. To make matters worse, the driver of the van kept on going and did not try to help her or even call 911. It’s a miracle Tammy survived.

When Alan called, Tammy was living at a rehabilitation center in a nearby town, so our lead attorney, Tim Riemann, went out to visit her there. It was clear that Tammy was badly hurt and had a long road ahead of her. Alan told Tim that the police figured out who was driving the vehicle that hit his wife and that he had some preliminary conversations with the driver’s insurance company, but that something about his interactions with the insurance adjuster was making him uneasy. We agreed to help.

A few weeks later, after collecting records and conducting an initial investigation, we sent a demand letter to the driver’s insurance company. Nine days later, the insurance company wrote back and offered $500,000, which was the full policy limit, to settle all claims related to the accident. The insurance company, however, wanted Tammy and Alan to sign a release that would have been far more expansive than what had been offered when we sent in the demand. Tammy and Alan decided not to accept the $500,000 and, instead, to proceed to litigation.

This was an intense case. Tammy would need help down the road, so we hired a life care planner to assess her future needs. We engaged multiple other medical experts as well who would be able to explain to the jury what happened to Tammy’s body when the van hit her.

One month before trial after deposing the driver who hit Tammy, the insurance company’s lawyers asked to mediate and, at the mediation, the insurance company offered its $500,000 policy limit plus an additional (and astonishing) $2 million. Tammy and Alan agreed to accept $2.5 million to settle their claims, and this extra money enabled them to buy a new home more suited for Tammy and provided extra security for them in the future.

We were tremendously happy about this result because $2.5 million provides for Tammy and Alan far better than the insurance company’s $500,000 policy limit, and we wanted that outcome for them. To be clear, though, 99% of attorneys would have pushed their client to accept the $500,000 offered after the first letter, before hundreds of hours are worked and tens of thousands of dollars are spent. We’re not like most attorneys, and we’ll do whatever we can to maximize our clients’ recovery.